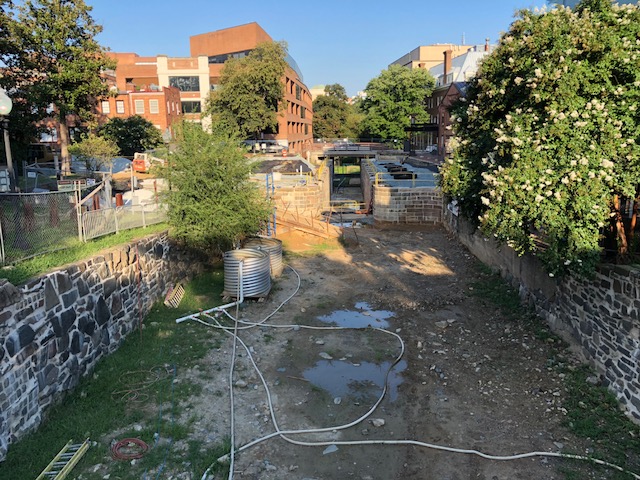 James Corner, founder of James Corner Field Operations, likes to take “overlooked places” and redesign them to “amplify what is already there.” In Georgetown’s case, the Chesapeake and Ohio Canal (C&O Canal) was built as a transportation link between western Maryland and Georgetown in the early 1800’s and later became a national park. It is 184.5 miles long and attracts about 5 million visitors annually.

But time has taken its toll and the C&O Canal in Georgetown is no longer viewed as a place to sit on a beautiful afternoon and have a picnic lunch. Georgetown Heritage, a nonprofit organization was formed to reimagine the one-mile, nine-acre portion of the Georgetown stretch of the canal. They have formed a partnership with James Corner, the National Park Service and the DC Office of Planning to create an urban park that will include different park spaces, usage of the five existing plazas along the Georgetown portion for outdoor markets, art spaces and green space. It’s also about much more than aesthetics. The canal system offers Georgetown flood protection and if it’s not fixed, structural failure could occur.

The ambitious proposal has divided the plan into eight distinct districts including: The Aqueduct, The Bend, the Walls, the Grove, the Locks, Rock Creek Confluence, Rock Creek and Mile Marker 0. Each section will include minor and major renovations to make the C&O Canal a vital part of the Georgetown community.

The Aqueduct, which is now essentially a ruin, is envisioned as a recreation gateway for the Canal. Potential improvements include a trestle, steps, an overlook, and a new connection to the boathouse. You can learn more about the canal plan and see some photo renderings here.

The Bend section of the canal, could include a new 34th Street Bridge with elevator and ramps, a garden lounge and grotto benches.

The Walls section that runs from 33rd Street to Wisconsin Avenue has tall walls close to the canal’s edge. Those walls would be changed in shape and size and a resurfaced square would create more gathering spaces. There would also be seating steps, a boardwalk, elevators, and a cut-out and catwalk at Wisconsin Avenue.

The Grove, which stretches between Wisconsin Avenue and Thomas Jefferson Street won’t see too many significant changes aside from landscaping, outdoor tables and seating, and groves of birch and mulberry trees. The entire Towpath will be leveled and stabilized and may be paved. It could be widened into a cantilevered edge to preserve the vegetation along the path. And the rebuilt path will address accessibility issues.

The Locks, which run from Thomas Jefferson Street to 29th Street is considered the historic gateway to the Canal. Improvements will include a boat launch, public restroom and NPS office renovations, a new visitor center, and Georgetown Education and Cultural Center which could provide canal-focused work, community-based activities, and educational programs. You can learn more about the canal plan and see some photo renderings here.

The Rock Creed Confluence and Rock Creek stretch from 29th Street to the intersection of canal and Rock Creek. It includes the area surrounding K Street where it crosses over Rock Creek. This area will see several new footbridges that connect to the shore. And possibly a new bridge to improve access for pedestrians and bicyclists to the Rock Creek Parkway path.  Potential enhancements could include a fishing pier and nature classroom or a sloping lawn, repairs to the Lock 1 wall, and a bicycle parking and service station.

Finally, Mile Marker 0 is seen as a civic gateway to the Canal. Potential enhancements include new bridges to Rock Creek Park near the Waste Gate and at the Creek, a new public facility for concessions and restrooms, a floating classroom, a station for bicycle repair and storage, and repairs to the seawall and tide lock walls.

“I think a lot of cities are beginning to reinvest in public open space, and they sort of recognized the importance of open space and the value it adds to the life in the city. It is great that the C&O Canal is being given this attention, and we really look forward to bringing it back to life, “said James Corner, founder of James Corner Field Operations.

The partnership is currently executing a multi-year planning project and is in the early stages of the $10 million project. Their next public meeting will be announced soon. You can learn more about the canal plan and see some photo renderings here.

The content above is brought to you by Georgetown Realtor, Melanie Hayes with TTR Sotheby’s International Realty.  You can contact her here.